A MYSTERIOUS tomb just a few miles from Dublin is older than the Pyramids of Giza and continues to baffle scientists.

Newgrange in Ireland’s historic County Meath is often overlooked when we think of ancient monuments but it’s just as strange and impressive.

Newgrange was built around 3200 BC[/caption]

The tomb is Ireland’s ancient wonder and dates back to around 3,200 BC.

That makes it six centuries older than Egypt’s oldest pyramid.

From a distance it looks like a big hill but it’s actually a “passage tomb”, carefully decorated with Neolithic stone carvings inside.

Newgrange is a passage tomb[/caption]

A passage tomb is a stone structure containing one or several tombs that is covered in grass.

Not much is known about the people who were buried there, who built it and how they built such a complex structure just using stone.

Generations of archaeologists have tried to decipher the mysteries of the tomb and its weird kidney shape.

Sunlight filters into the tomb from its “roof-box”[/caption]

One feature that baffled scientists for years is how the Neolithic people created a structure that has its tomb and passage lit up by the Winter Solstice Sun every year.

On Midwinter’s Day, about four and a half minutes after sunrise, light shines through the tomb’s “roof-box” and lights up the whole chamber.

Scientists were originally confused by the hole in the roof until they realised it was intended to bring sunlight right into the tomb on the shortest day of the year.

Newgrange was declared a UNESCO World Heritage Site in 1993 and can be visited by tourists. 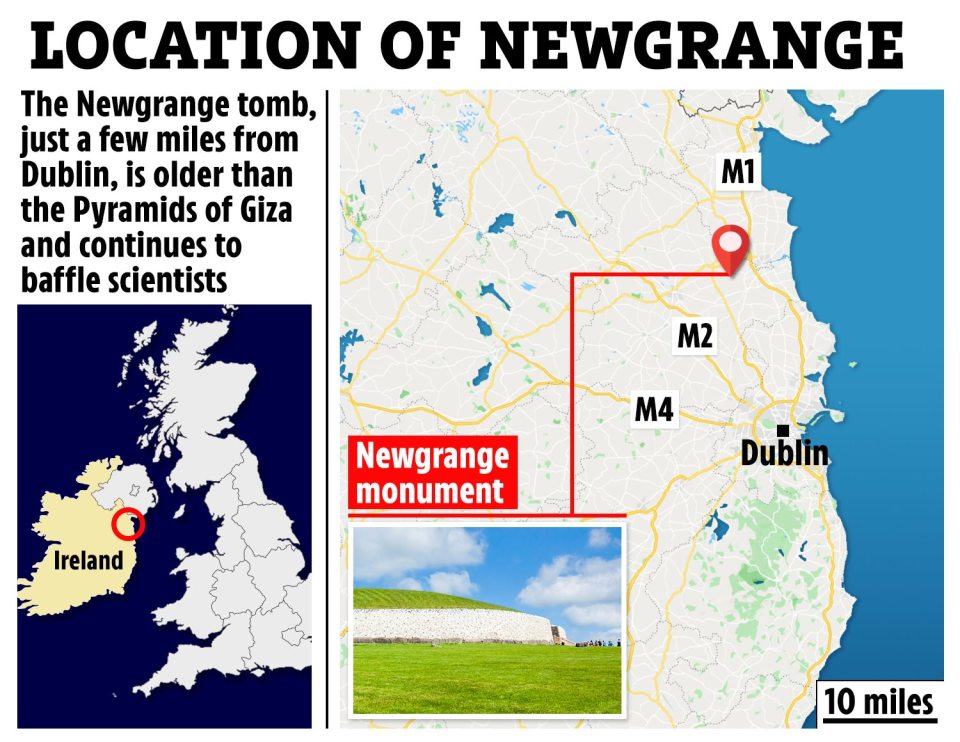 
Mystery over origin of 'spaceship' that soared past Earth finally solved

In other archaeology news, prehistoric stone carvings depicting red deer have been discovered in a Scottish tomb.

The first humans to set foot on the North American continent could have arrived 30,000 years ago, according to new evidence.

Email: How to make the most of the world's biggest media technology platform