One in 4 Medieval Brits had BUNIONS caused by craze for pointy shoes, analysis of 600-year-old skeletons shows

A LOVE of pointy shoes in Medieval Britain left one in four of the population with bunions on their feet.

That’s according to a new study which used skeletons to show how a fashion trend for pointy shoes left many with deformed big toes.

Researchers were investigating medieval remains in Cambridgeshire in the UK and found that graves which likely belonged to wealthier individuals and clergy showed evidence of bunions.

Bunions, also referred to as hallux valgus, can happen when you wear shoes that are too tight.

They can leave you with a big toe that’s angled in towards your other toes and a piece of bone that protrudes out from the side of your foot.

The medical issues is common today in women who wear high heeled shoes all the time.

Archaeologists from Cambridge University analysed from 177 skeletons from four cemeteries in and around the city they’re based in.

They found 27% of the individuals from the 14th and 15th centuries showed evidence of bunions.

They think it may have something to do with a point tip shoe that was very popular in the 14th century.

Some of the toe bones show clear signs of damage[/caption]

The team from Cambridge University’s After the Plague project have just published their findings in the International Journal of Paleopathology.

Study co-author Dr Piers Mitchell from Cambridge’s Department of Archaeology said: “The 14th century brought an abundance of new styles of dress and footwear in a wide range of fabrics and colours.

“Among these fashion trends were pointed long-toed shoes called poulaines.

“The remains of shoes excavated in places like London and Cambridge suggest that by the late 14th century almost every type of shoe was at least slightly pointed – a style common among both adults and children alike.

“We investigated the changes that occurred between the high and late medieval periods, and realized that the increase in hallux valgus over time must have been due to the introduction of these new footwear styles.”

The rich medieval people would have suffered to look fashionable[/caption]

First author Dr Jenna Dittmar said: “We think of bunions as being a modern problem but this work shows it was actually one of the more common conditions to have affected medieval adults.”

She added: “Modern clinical research on patients with hallux valgus has shown that the deformity makes it harder to balance, and increases the risk of falls in older people.

“This would explain the higher number of healed broken bones we found in medieval skeletons with this condition.” 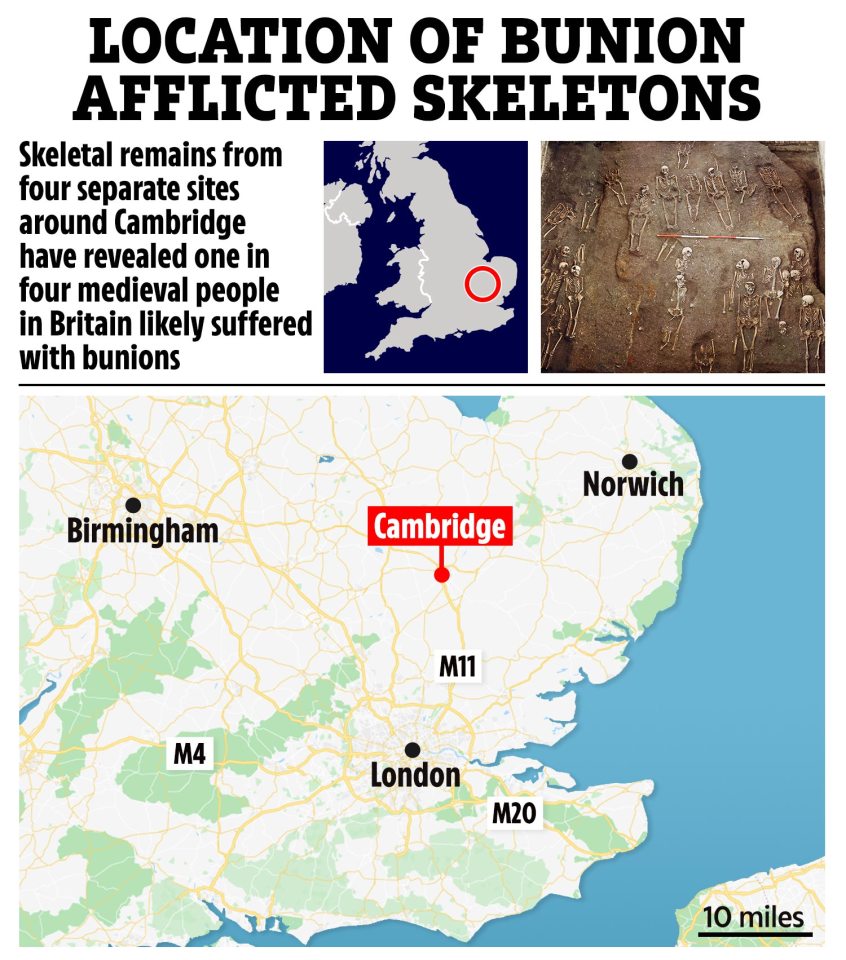 Of the 31 total bunion sufferers discovered, 20 were men.

A lot of them are thought to have worked for the church as it was common for clergy to wear fashionable clothes at the time.

The problem is thought to have become so big in medieval society that King Edward IV passed a law that limited toe-point length to less than two inches for people within London.

LOOK TO THE SKY


When is the next solar eclipse in the UK and US?


How to watch the solar eclipse safely

THE EYES HAVE IT


How to watch the solar eclipse in the UK and US

In other news, the first humans to set foot on the North American continent could have arrived 30,000 years ago, according to new evidence.

Roman skeletons dating back 1,700 years have been unearthed at three Roman cemeteries in Cambridgeshire.