TOM CURRY  vowed to shut up Lions’ noisy neighbours across Cape Town — but claims tomorrow is NOT a World Cup revenge mission.

Flanker Curry found himself in the firing line as South Africa boss Rassie Erasmus went into self-destruct mode with his video takedowns on social media.

The big-hitting Lions forward was bagged three times for what the sobbing Springbok thought were acts of foul play — including one late whack on his Sale teammate, scrum-half Faf de Klerk.

But as the heat increases on Curry, the 23-year-old promises  to make sure this spicy series is settled once and for all after the Lions’ First Test triumph.

Curry brushed-off Erasmus’ attempts to reel the tourists into a war of words.

With a cheeky smile, he said: “The beauty of being in camp and a proper lockdown camp is that you don’t hear much of that, unless you really go looking for it, which I don’t think anyone does.

“I know he’s spoken about something and I imagine I’m involved.

“I can imagine at least one of them that he’s referring to.

“One of them was very silly, it wasn’t born out of frustration, but it’s frustrating to look back on. It was late. It was silly.

“And in these big games, the Second Test, what is going to happen in terms of the way the series goes — there is always going to be noise around that.

“So it is about how we can properly focus on ourselves. 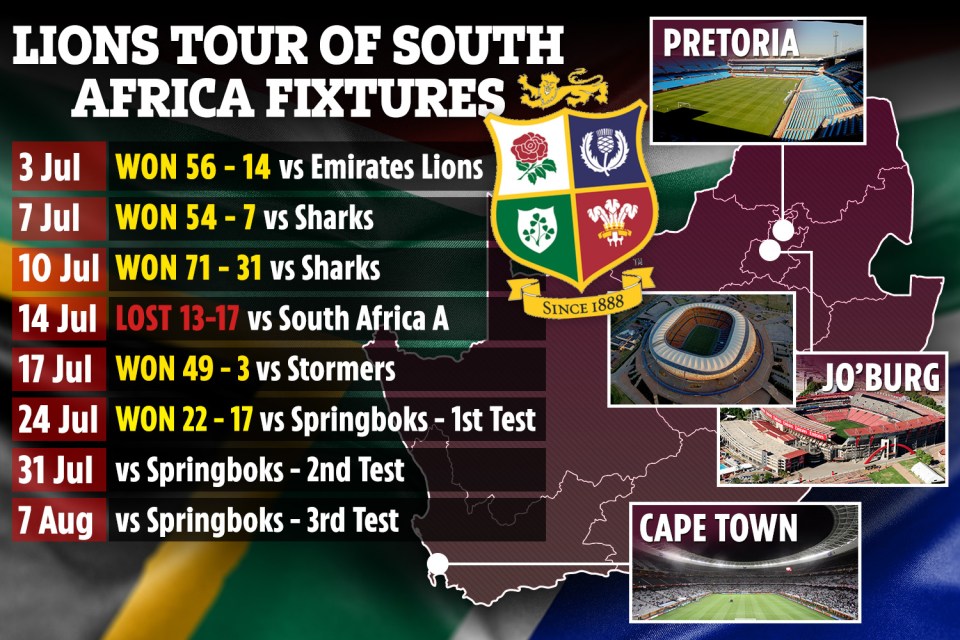 “Whether they bring noise or whatever — it is all about us being controlled, calm and keeping our discipline.

“And you’ve got to love the aggression and the intent that they bring.”

With a Bok-lash coming from the green corner and a possible Bok-wash from the red one, the Lions can create history by going 2-0 up for the first time since the heroes of 1997.

For the Englishmen in Warren Gatland’s squad like Curry, it also offers them the chance of World Cup redemption after losing the 2019 final to Erasmus’ side.

But ahead of the monster South Africa showdown Curry said: “Things aren’t really born out of revenge, are they?

“The best things are born out of an excitement and a readiness to go.

“You are never going to forget about it, but this weekend isn’t about revenge for two years ago.

“This weekend is about a new team, new players, me being new and going after this weekend and enjoying it.

“That’s where I will get the best out of myself on Saturday, rather than revenge.

“I would like to think I’ve grown up in two years. I’m able to rationalise things a bit better.

“On field and off field I’ve probably grown up and the way I see it is probably a bit different. It’s different but the excitement is definitely there.

“It will be hugely emotional and passionate — especially for that first 20 minutes — physical and everything that you would expect.

“We have to make sure that we are not matching them, but pushing above them.”

Curry and the rest of the British and Irish Lions  will, no doubt, be fired-up by Gatland and his skipper Alun Wyn Jones this week.

Jones, 35, starts his 11th consecutive Lions Test as he chases his first series win here. And he warned the Springboks: “We are expecting the game and the intensity to go up a notch.