CHILDREN could get Covid vaccines in WEEKS in a desperate bid to stop any more school closure chaos.

Experts believe that the roll out of jabs for kids aged five to 11 may be key to stop disrupting education because of staff shortages. 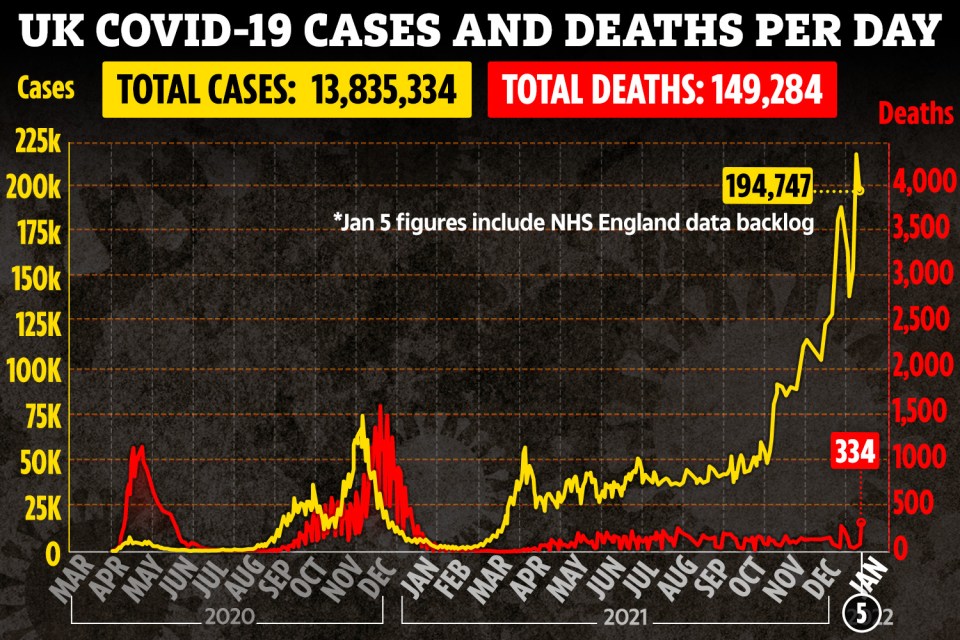 Professor Russell Viner believes that the “balance of risks” indicates that schoolchildren should be vaccinated.

His claims come after a string of hugely positive studies show Omicron IS milder than other strains, with the first official UK report revealing the risk of hospitalisation is 50 to 70 per cent lower than with Delta.

Prof Viner, from University College London, is an expert in child and adolescent health and is a member of SAGE.

He believes that while the age group are the least affected by covid sickness, if they were jabbed then it could stop the spread of the virus to staff.


Mum accused of killing son, 7, after boy found dead outside home in the cold

Speaking to the i he said: “Five to 11s are probably the group least affected by Covid disease.

“The thing about Covid is it’s got the most extraordinary age risk profile… to be honest, five to 11 is the healthiest time of our life.

“It’s the time when we’re least likely to die or get sick from almost anything, and that is true of Covid.

“However, I expect and I would like the Government to include educational disruption and mental health issues in the decision, which is what happened with teenagers.

“I think it’s a very marginal medical decision, but if you include those broader issues.

“I think given the extremely promising safety profile in children– but I think the balance of risks is towards vaccination.

“We can be fairly sure that this is really a very safe vaccination for the five to 11-year-olds.”

He said that current data suggested that extremely rare side effects, such as inflammation of the heart, is far lower in primary school children than older teens.

But he has warned that it will not be easy to vaccinate the age group, with more NHS staff needed to succeed in the rollout.

Prof Viner added: “Teenagers are able to cope with a needle in the arm, but younger children are much more likely to get distressed.

“Vaccine centres will “need to have staff who are trained at dealing with distressed children.

“There’s a whole lot of complexities about vaccinating children that I’m sure that the NHS is thinking through, but this won’t be easy.”

read more on the sun

Since returning to school earlier this week head teachers have warned that areas with higher cases could struggle with finding enough supply teachers to cover gaps caused by isolating staff.

Secondary school pupils now have to wear facemasks in the classroom again with ministers desperately trying to avoid another home-schooling fiasco.

Other worst-case proposals include teaching multiple classes in school halls – which has been blasted by teachers for not being a “long term” solution.

Education Secretary Nadhim Zahawi has admitted that facemasks in schools make it more “challenging” for pupils and teachers.

He insisted he would do everything possible to keep schools open, but could not rule out closing them entirely if it were deemed necessary.

Despite self-isolation rules being changed, teachers might be forced to stay at home for 10 days after testing positive.

It means parents could find themselves plunged into the chaos of last year’s spring term, with pupils and teachers repeatedly being sent home unnecessarily.

Many may have to go back to home schooling or rush to find childcare at the last minute.

Pressure is also ramping up on the Prime Minister to slash self-isolation period from seven to five days.

A senior World Health Organization official claimed it was “advisable” not to adapt coronavirus-fighting strategies based on “early” Omicron data.

But Boris is facing mounting stress to reduce the time period to allow schools and other workforces to get back to normal.

The Government has said there are “no further changes” planned on reducing quarantine periods but insisted the rules would be kept “under review”.

A SQUEEZE of lime can make fellas extra zesty in bed, experts claim. A study suggests blokes should combine it with Viagra for better results. GettyCombining lime with Viagra makes drug...

BLUE Monday is said to be the saddest day of the year when many of us feel a lull in our emotions. In 2022, the day falls on January 17. Here...

AN NHS rule change could see millions of Brits charged for prescriptions they currently get for free. The Government is reviewing whether to raise the qualifying age for some medical cost...

A NURSE fighting for her life in a 45-day Covid coma was saved after colleagues used VIAGRA to treat her. Monica Almeida, 37, was just 72 hours from her ventilator being...

TOUGHER lockdown restrictions could last until the spring under one scenario proposed by government scientists. Boris Johnson is to decide on Monday what measures are needed to tackle the Omicron Covid...

A DAD-of-three died of a brain tumour months after complaining of headaches, his heartbroken wife has revealed. Gwilym Llewellyn, 51, thought the pain in his head was caused by medicine he...