A GRAN died of lung cancer after her symptoms were misdiagnosed as an allergy.

Jacqueline Richardson, 58, was given allergy tablets after complaining of neck swelling and aching arms in an over-the-phone appointment.

Her GP practice in Middlesbrough, North Yorkshire, continued to treat her for an allergy after she went back to her doctor with weight loss, breathlessness, chest bruises and puffy eyes.

Partner Gary Crimmons, 61, took her for a private hospital appointment when they found the mum-of-two had stage four cancer.

It was three-and-a-half months after her first GP meeting in March 2020.

Construction manager Gary told TeessideLive: “Those months could have been the difference between her being here today and not being here. 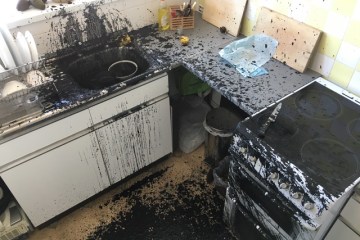 My flat was covered in stinking filth that shot from the sink, I’m furious

“She didn’t get a choice. No one gave her any proper advice.

“If we hadn’t gone private she would have dropped down dead. We had to find it out ourselves.”

Jackie died in February after the cancer spread to her brain. She leaves behind daughters Hannah, 29, and Alisha, 25, as well as grandchildren twins Rimannie and Riella, eight.

Alisha, a nurse, said: “How would an allergy cause weight loss and breathlessness? The doctor said the dog shouldn’t sleep on the bed at night and they advised her to stop it.


Cat owners are seen as better looking and have more sex, research claims

The family acknowledged the pandemic meant she could not get an in-person first appointment but said the practice still treated her for an allergy when she did go in.

Gary added: “They misdiagnosed her. It’s as simple as that.”

Targeted therapy did shrink Jackie’s tumour but it grew again after nine months. She had radiotherapy but turned down chemotherapy because of how poorly it made her late sister Carol.

A spokesman for the Medical Defence Union, on behalf of Crossfell Health Centre, said: “While the practice wishes to offer its condolences, it is unable to comment on this matter.”

A CQC inspection in 2017 found the practice required improvement for providing responsive services in terms of patients’ access to appointments.