ENGLAND retained their Women’s Six Nations crown – and they did it in style too.

Red Roses were formiddable this tournament and their dominance was displayed by beating all five nations put in front of them.

Questions were initially raised on whether they could pull off a win over France who was giving the English women a run for their money.

But all doubts were put to bed when Simon Middleton’s side fought hard to defeat Les Bleus and achieve their 18th Six Nations triumph. 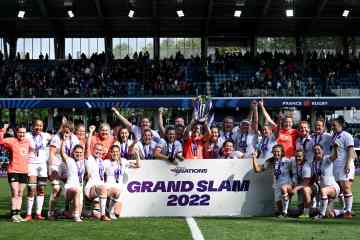 The 2022 edition of the Women’s Six Nations returned to a five-round format and below are the results from the tournament.

The timing of the Women’s 2022 Championship breaks the traditional link of the men’s tournament.

But Ben Morel stated that: “Increased visibility is key for the growth of the women’s game.


Who is Dan Biggar's wife Alex and do they have children?


What we know about Ugo Monye's wife Lucy Monye

“We are delighted to have enhanced broadcast partnerships in place along with a continuation of the dedicated window from which we saw success last year.

“These two key developments along with continued investment in many other areas including performance, commercial and marketing will enhance the Women’s Six Nations for fans and players alike.”

ERIK TEN HAG has reached a verbal agreement to join Man Utd this summer, according to reports. The Ajax boss is said to have won out in the recruitment process over...