COPS were forced to release a suspect arrested for immigration offences after angry crowds clashed with officers.

An army of people surrounded the Immigration Enforcement van chanting “let him go” in Peckham, south east London on Saturday.

The stand off, which lasted for a number of hours, saw over 100 Londoners take to the streets in protest.

They congregated in Evans Cook Close in a bid to thwart the Home Office immigration raid, refusing to move unless the man was released.

The suspect had been detained inside a police van while a swarm of supporters obstructed its exit.

Some sat on the ground in front of the vehicle “eating ice lollies” in protest of his arrest. 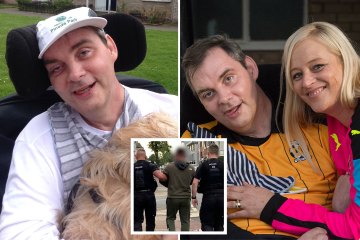 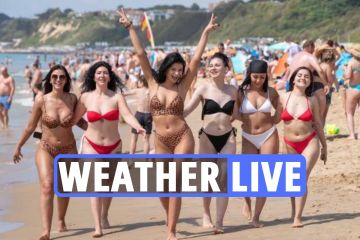 Extraordinary footage captured the blockade, with crowds chanting “We won’t be moving until the man is released,” and “You say people, we say power, people power.”

Despite Metropolitan Police officers being called to help out Home Office officials, they were unable to subdue the large group.

They eventually had to relent and announced the suspect would be released – much to the crowds’ delight.

People were heard crying “Don’t come back to Peckham,” as they escorted the police van out of the estate.


England star booted out by partner after splashing £55k on escort

The man, who had been arrested on suspected immigration offences, has now been released on bail.

The Met Police confirmed they had been called shortly after 1:30pm “to a report of protesters obstructing immigration officers” and said officers remained at the scene shortly before 5pm.

A spokesman for the force said: “Officers attended and found a van was being prevented from leaving the location.

“One man has been arrested by immigration enforcement officers for immigration offences.”

Eleanor Janega, 39, told PA: “We were alerted that there was an immigration raid in process so locals came down to block it.

“We had been sitting here blocking the van and having ice lollies.

“They brought more police in and tried to break through the crowd by pushing us. We all sat down.”

Labour councillor Reginald Popoola said the crowd had “encircled the van peacefully”, but some people were shoved.

Discussing the news the man had been released on bail, he proudly proclaimed: “He’s being released, peaceful protest is powerful.”

Another woman described how cops “gave up” trying to arrest demonstrators.

The activist explained: “Police tried to arrest a number of activists at the front, but they were held onto by others who were also sitting down and the police gave up.

“And finally, after a lot of protest, the police announced that they were going to release him.

“It took, I don’t know, about half an hour for them to actually open the doors so we all stayed and called for this to happen quickly.”

THIS is the terrifying moment a massive brawl unfolded in front of terrified shoppers as they screamed “he’s got a knife”. Cops raced to Chatham High Street in Kent around 3pm...

THIS is the shock moment a bus explodes as a raging fire takes hold at a depot. Huge plumes of smoke can be seen across Potters Bar in Hertfordshire as firefighters...