IT is insane that the EU can slap supposedly punitive new sanctions on Putin while simultaneously bankrolling his genocide.

We know past leaders got their economies hooked on Russian energy.

But these fresh curbs won’t cripple the madman while gas revenue keeps pouring in.

EU nations have bought €35billion of it since the war started, while giving just €1billion in lethal aid to Ukraine.

Their new sanctions, like ­ours, bite only tiny chunks from the Kremlin’s income. 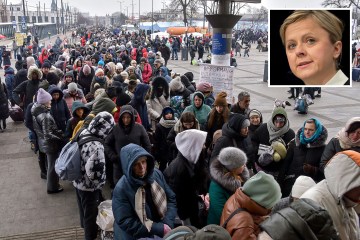 Brits will need to offer Ukrainians fleeing war support, as well as a room

Not yet we’re not.

Germany and others are so terrified of life without Russian gas they cannot countenance a total ban.

There are now reports of the industrial slaughter of civilians in Mariupol and their incineration using mobile crematoriums.


Brits will need to offer Ukrainians fleeing war support, as well as a room


Putin's forces are animals, West must treat them like the criminals they are

That would tell of a Kremlin which set out to unleash orchestrated horrors unseen since the Holocaust.

If we will not deploy Nato troops to stop Russia, sanctions must bankrupt them — whatever hardship that brings to Europe.

IT’S tough to fathom the minds of British social media conspiracy theorists who make excuses for, or openly back, Putin.

This madness unites the Corbynite hard Left with right-wing anti-vaxers.

Such is their loathing for the West’s media and governments they literally believe the Kremlin’s absurd lies over filmed testimony from traumatised Ukrainian widows who saw their husbands casually executed by Russians.

Football’s Matt Le Tissier isn’t that craven, though he too disputes the truth of the massacres in Bucha.

What are he and others struggling to grasp?

Do the conspiracists really think a tyrant of such monstrous and wicked ambition, a new Hitler, would level Ukrainian cities but NOT ­terrorise and massacre civilians?

The Soviets used to call such sympathisers “useful idiots”.

It is far too mild a term for those now siding with evil.

MONSTROUS Jon Venables must be kept behind bars.

Since he murdered James Bulger the system has treated HIM as a victim.

Monster Venables must be kept behind bars[/caption]

In 2001 he was freed with a new ID and a lifelong media gagging order.

Yet he was then caught twice with child sex abuse images and is back inside.

Dominic Raab will fear the killer could hoodwink the panel, as in 2013.

The Parole Board must spare him the worry.

Venables remains a danger to children.

He blew his second and third chances — he must not be given a fourth.

CRIPPLING rail strikes. British Airways staff voting for a summer walkout. Teachers demanding higher pay. A cost-of-living crisis being top of voters’ minds in Thursday’s by-elections. After these events of the...