STARGAZERS are being treated to a spectacular celestial showcase this week as three planets and the Moon align in the night sky.

Venus, Saturn, Jupiter and Earth’s rocky satellite will appear over both the US and UK every evening from Tuesday to Friday. 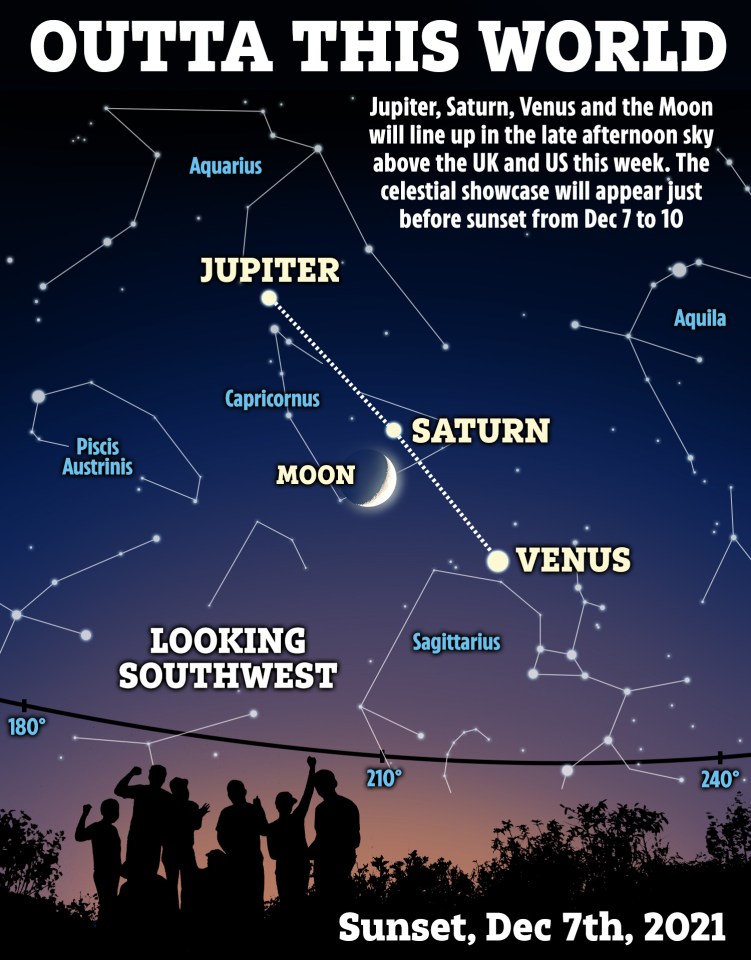 The planets should be visible to the naked eye while our lunar neighbour will prove a little more challenging to spot.

To view the alignment yourself, head outside just before sunset and look southwest.

Venus, Saturn and Jupiter will be lined up in the twilight sky just north of the Sagittarius and south of the Aquarius constellations.

Venus will be the brightest, lowest planet, with Jupiter the second brightest but highest. Saturn, in the middle, will be a little darker.

The Moon will move along the line of planets throughout the week, starting off near Venus and ending closer to Jupiter.

The grand finale takes place on December 10, when all four stretch themselves into a dramatic straight line across the southwestern sky.

Earth’s nearest celestial body will also brighten up as the week goes on.

Roughly 16 per cent of its surface will be illuminated on Tuesday rising to 35 per cent on Thursday.

For your best chance of catching a glimpse of the alignment, pick a spot with little light pollution and a clear southwestern horizon.

The alignment should be visible throughout the night but will be at its brightest just before sunset.

As a reminder, that’s around 4:30 pm local time in London and New York this week.

If you’re unsure what you’re looking at you could always download a stargazing app that pinpoints objects of interest.

Make sure you give your eyes a break from your phone afterwards though, as stargazing is best when your eyes have adjusted to the dark.

Keep in mind that some apps are free but others charge a small fee to download.

It’s advisable to read the reviews of an app before downloading to ensure you get the most bang for your buck.

A conjunction of the planets Jupiter (top left), Saturn (middle) and Venus (bottom right) in a line as seen from Queenborough, Kent last month[/caption]

In other news, Apple has announced that it will let customers fix their own iPhones for the first time starting next year.

The UK is fighting an epidemic of hack attacks targeting consumers and businesses, according to officials.

NASA has slammed Russia after a missile it fired into one of its own satellites forced the space station to perform an emergency swerve.

And, a 75-year-old Brit has told of his anger after scammers on WhatsApp fooled him into sending them hundreds of pounds.

A GROUNDBREAKING new face mask that can detect the presence of Covid-19 has been developed by scientists in Japan. The non-woven mask features a mouth filter made using ostrich cells. The...